Since starting my Job with Cornell, I've been told there are many traditions that go on. One that just recently happened was Dragon Day.

I had been told my many friends/colleagues that Dragon Day was a special day; it is an old tradition, and would be a day filled with Dragons, fighting, and burning. I started doing some searching of my own and found some really nice pictures of Dragons of yore. I was starting to get exicted. I would be able to see a well crafted Dragon, possibly fight a Phoenix, and then burn; how cool is that?

I think they forgot to tell the students that.

This is what I was greeted with on that cold, wintry day. 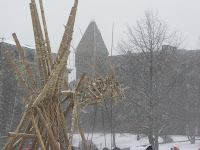 A creepy, skeletal dragon? Where's the skin? The scales? All missing. Not quite what I was expecting.
Granted, I later found out it was made of bamboo poles and the Freshmen didn't have a lot of money...but my hopes were dashed.

On the bright side, I did meet some interesting people.

Email ThisBlogThis!Share to TwitterShare to FacebookShare to Pinterest
Labels: DragonDay